Together with the newspaper Dagens Nyheter to Sarek National park.

Together with the newspaper Dagens Nyheter to Sarek National park.

We are now in the end of the season. The weather has turned and it has been raining a bit.
On the 28th of April we chose to lie still instead of fighting against the elements of nature. Instead we, Anette from Dagens Nyheter and me (Matti) chose to start early the next morning. Saltoluokta Mountain Stations area was still and sleeping while we hooked up our snow hooks and steered our dog teams up the hill to the bare mountain. The huskies held good speed over the frozen open spaces. Standing on the sliding sleds we saw the sun rise over the horizon. We took of the trail on the highest point between Sitojaure and Aktse and steered west in to Sarek National park. Sarek is a part of the world heritage Laponia. It was stone hard ice crust covered with 5-10 cm of powder snow. What more can you wish for as a musher? We set a base camp west from Skierfe on the edge to the Rapavalley. Anette took some pictures and awaited the sunset. By sunset we took the snow shoes up to the top of Skierfe. It tingles in the stomach when you look over the edge of Skierfes cliff 700 metres straight down. The next morning we got up early, harnessed the dogs and drove the dog teams down along Abmojåhkke ravine. When we reached the Sitojaure cabins it had become rather warm so we stopped the teams and took up the box with food and had a coffee break in the sun. The Swedish Tourist organisations house keeper “Tobbe” with company were there to service the cabin. They should change gas, change some tin on the roof and fix some things here and there. There are always things to do. After a while the hostess “Ulla” came gliding on here skies. The last part back to Saltoluokta we had to take it slow and stop many times so the dogs didn’t over heat.Read more about Anetts photo project.
/Matti

Jokkmokkguiderna
We are a small company based at the Arctic Circle which delivers outstanding wilderness travel experiences during summer and winter.
Previous postThe northern Kings Trail with huskies.
Next postModern Mushing to end the season! 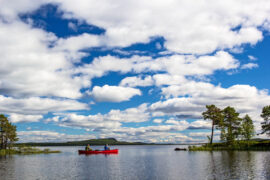 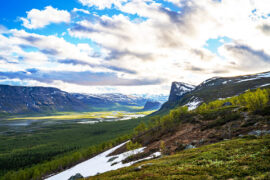 
NEW TOUR! Hiking to Skierfe and the gate to Sarek

A small but really beautiful sign of spring. Green

The sun just dropped under the horizont. It will b

Sarek National Park in September. Do you like to j