Anyone who googles Kungsleden will receive more than half a million hits. That speaks volumes about Sweden’s most well-known hiking trail.
Since more than 40 years back Kungsleden the King’s Trail covers 425 kilometers, from Abisko in the north to Hemavan in the south. But the northernmost parts of this rich hiking trail are more than a hundred years old. 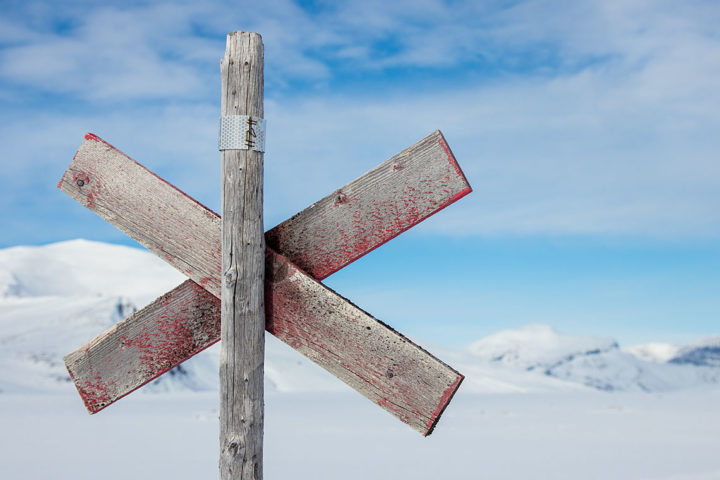 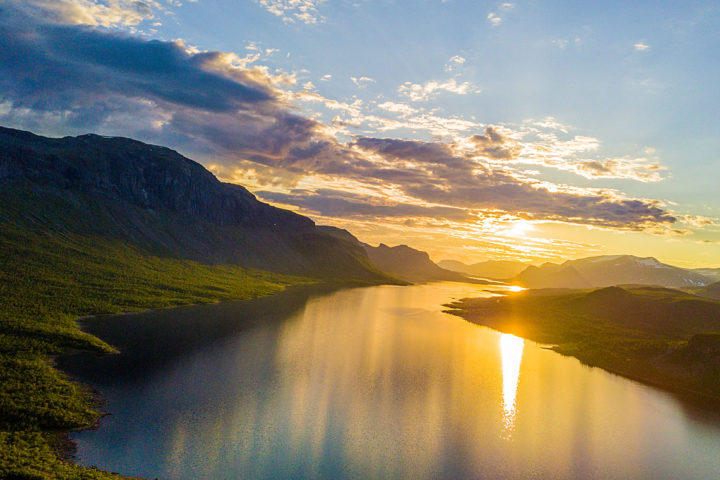 Sunset over the valley by Saltoluokta. 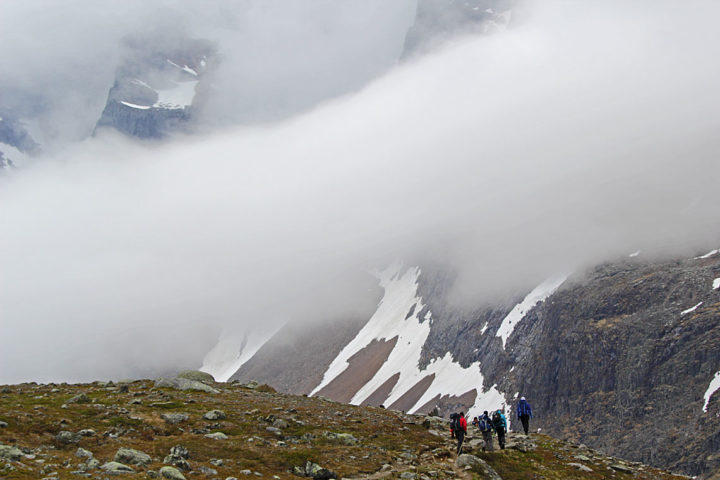 Already by the end of the 19th century the Swedish tourism association (STF) began formulating plans of a connected hiking trail through the Swedish mountains. It would be a trail passing through all the most beautiful spots, a king of trails so to speak – the result was Kungsleden, or the King’s Trail.
As early as 1907 the first cottages were built along the trail by the Swedish tourism association, near Abiskojávri and Giebnegaisi/Kebnekaise.
The preparations of the trail began from the north. By the end of the 1920’s the entire stretch from Abisko to Kvikkjokk, or Huhttán which is the Sami name, was complete. At that time, in 1928, STF also began using the name “Kungsleden” in a more official capacity for the first time. In the 1950’s the King’s Trail reached all the way down to Ammarnäs in the county of Västerbotten, and in 1975 it would reach what is currently the southernmost point, Hemavan. 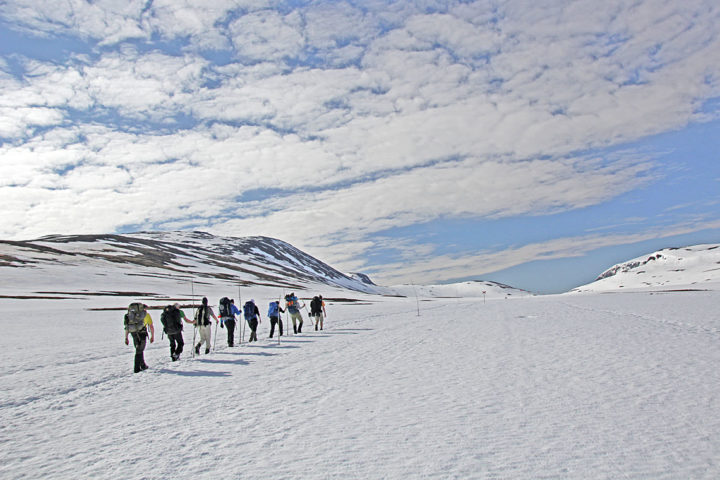 The snow can stay long on the high passages. Sometimes well into the summer. 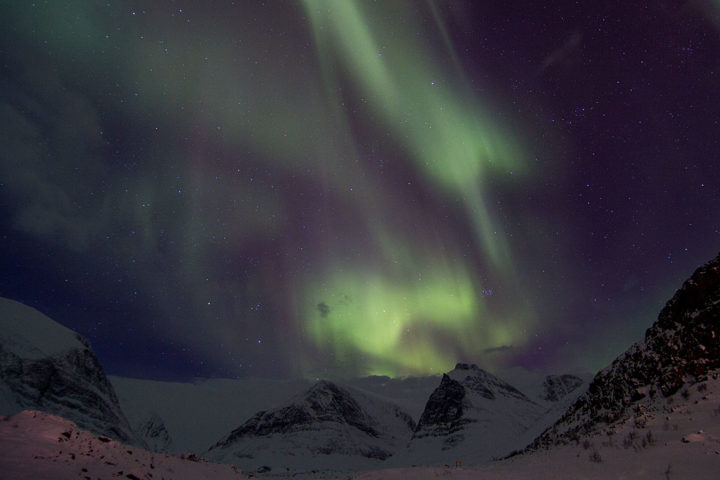 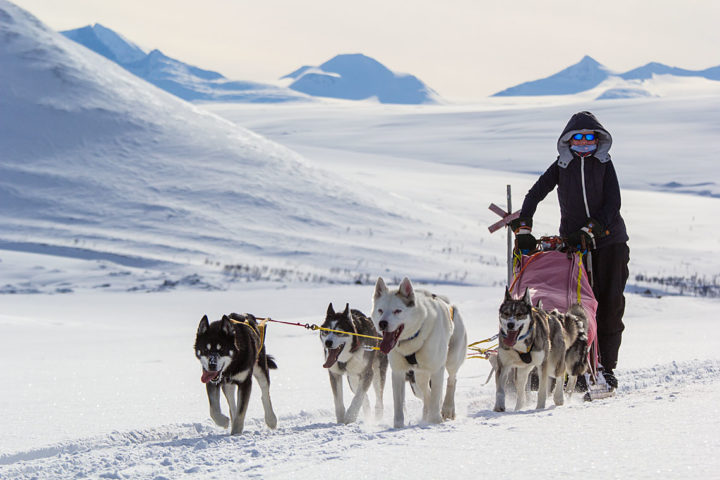 Many of our tours go along parts of the King's Trail.

The Swedish tourism association, STF, is in charge of the cottages located along th Kungsleden trail. No less than 16 cottages and several mountain stations can be found along the trail from Abisko to Hemavan. In the section between Kvikkjokk and Jäkkvik there are not cottages. 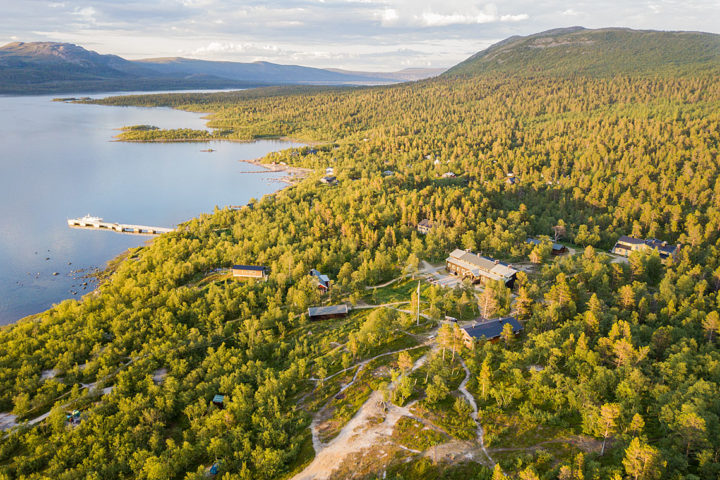 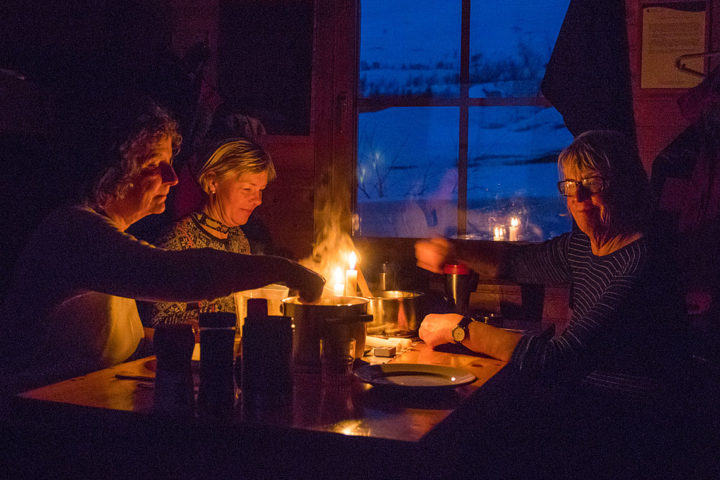 The Swedish tourism association offers good comfort in their cabins. 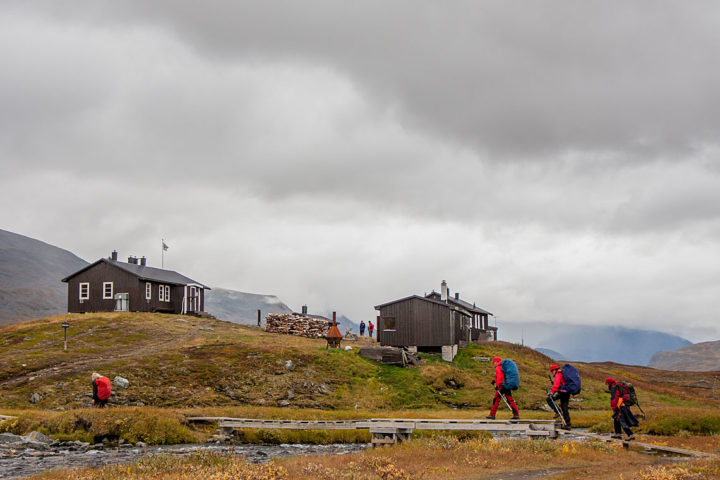 The cabin in Sälka on the north part of the King's Trail.

Kungsleden, the King’s Trail passes through a major part of Sami country, Sápmi/Sábme/Saepmie as it’s called in North, Lule and South Sami respectively. The trail passes through the four national parks of Abisko, Stora Sjöfallet, Sarek and Pieljekaise. It will take you through almost all of the county of Lappland and partly through the Unesco World Heritage area of Laponia.
The terrain that the King’s Trail swirls through is varied, but above all the hiker will set foot on a mountain landscape, sometimes barren and borderline sterile. At its highest peaks the trail reaches 1000 meters above sea level. Some sections also pass through mountain birch forest landscape and high herb landscapes, and at the lowest parts in some of the valleys you’ll be met by forests of thick pines, grey dry pines and low retained fir trees. 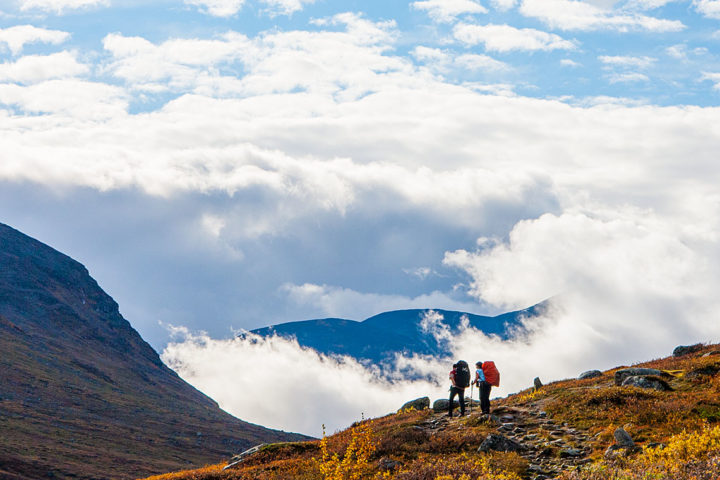 The trail offer many different kind of terrain. 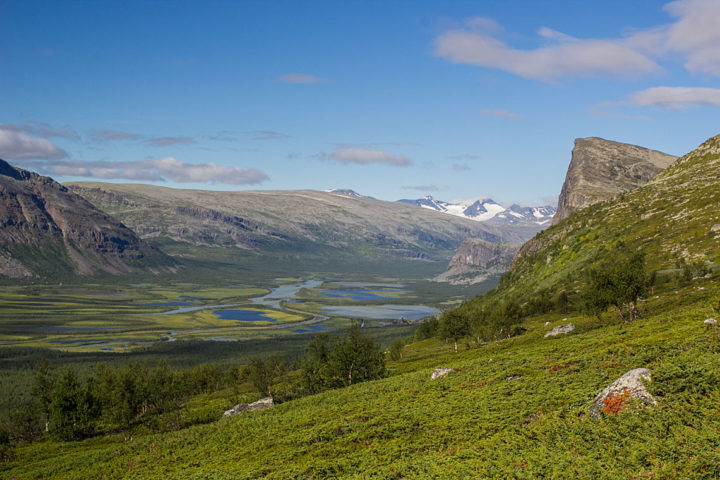 View over the Laitaure delta. 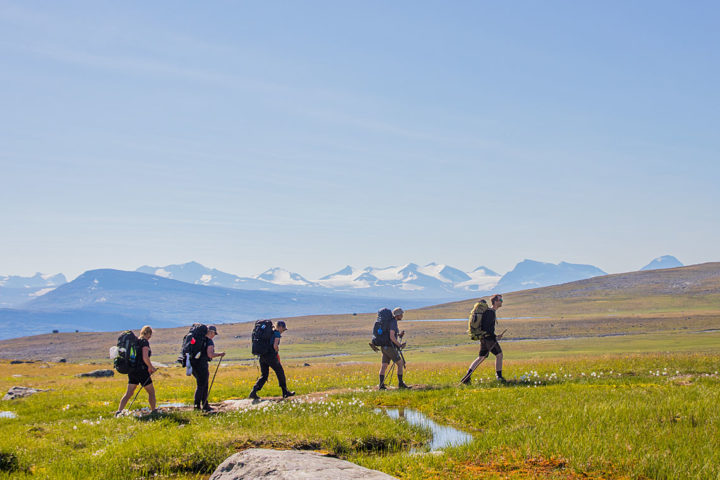 Above the tree line up on the mountain moors the view is expansive.

The landscape around the Kungsleden trail is home to a rich flora and fauna. The chance of seeing one of the major four-footed predators – wolf, bear, wolverine and lynx – may not be that great, but they are there. In the autumn the lucky hiker with the help of binoculars might see a bear sniffing the ground vacuuming the mountain slopes for crowberry. Moose populate the areas and during the summer reindeer are grassing the mountains. Hare, fox and lemming are also among the rich fauna along the King’s trail, as well as a large number of bird species. Around half of Sweden’s 400 or so bird species have been spotted in Lapland. The observant hiker may spot anything from the golden eagle, regular eagle and buzzard to grouse, golden plover, blue-throat and various sea birds.
The vegetation varies heavily between the highest and lowest points of the trail. In the barren mountain landscape you’ll find the real survivors of nature, including glacier crowfoot and avens. The birch forest may either be heavy on berries, moss, lichens and heather, or it may consist of a lusher so-called meadow birch forest with tall herbs such as wolf’s bane, angelica and globeflowers. Even further down in the needle forest you’ll find many of the animal species from the old forests including marten and capercaillie, and rare plants such as mezereon and red magic wand. 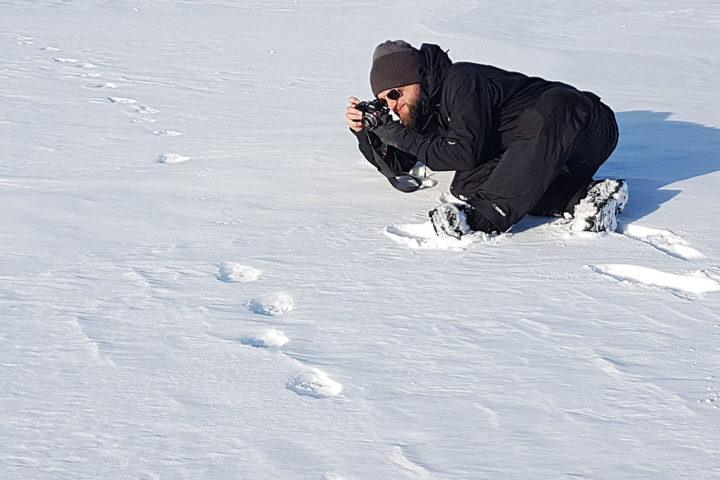 Wolverines are very timid but sometimes you can see tracks in the snow. 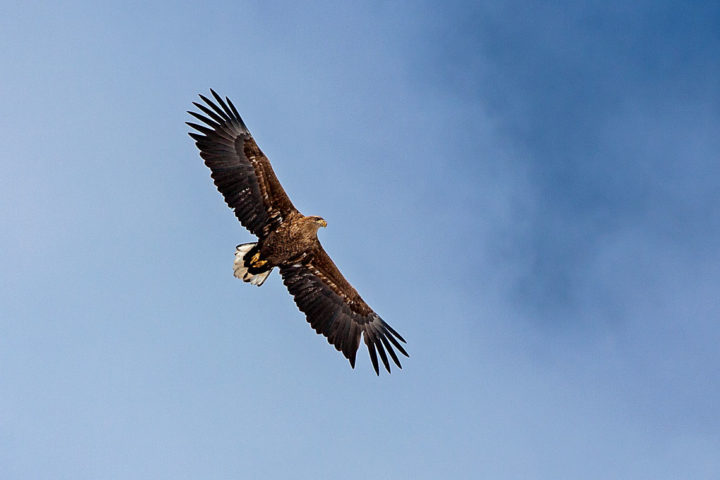 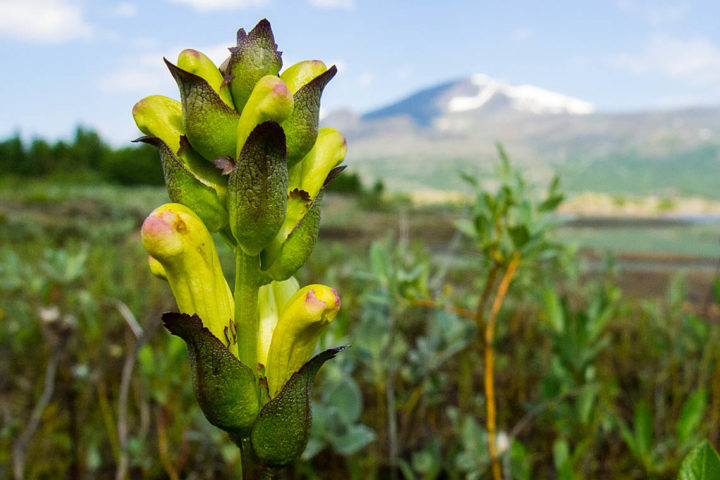 The King’s Trail goes through an old Sami landscape where people who have lived and cultivated the lands historically have left few or no traces behind them. It can be difficult to spot old fire places, meat hideouts and pitfalls, but they are there. Very close to Saltoluokta there’s an example of an extensive pitfall system. In the old forest you can find grey cuts on the tree trunks which are remains of Sami bark extraction. It was common that the Sami people, using a horn knife, cut off a piece of bark from young pine trees and grilled the inner parts of the bark.

The last rays of the sun paint the mountain top pink. 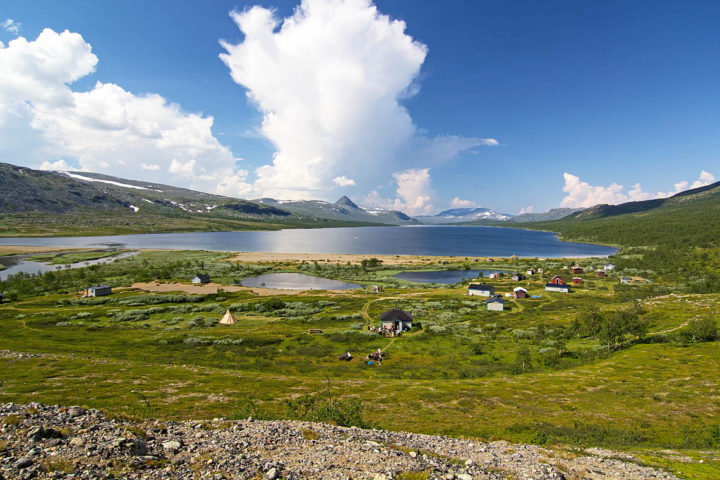 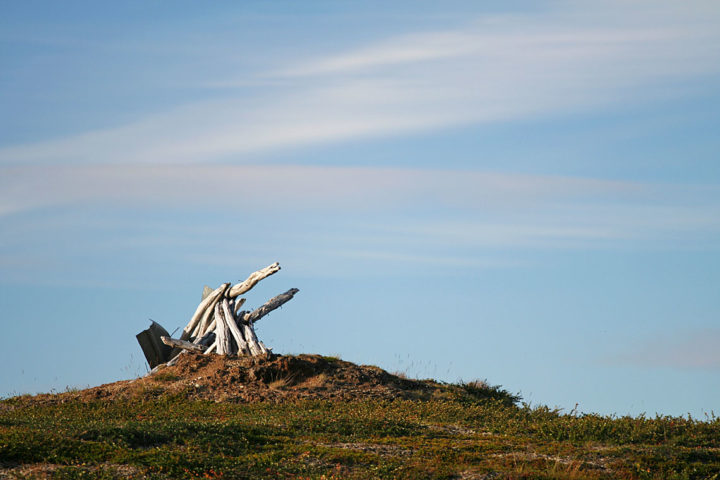 Ruins of an old Sámi hut.

The King’s Trail in litterature

Kungsleden – The Royal Trail Through Arctic Sweden by Claes Grundsten is a guide in English of the hike along Kungsleden. Others who have authored guides about Kungsleden include Annika Berggren, who have divided her books in two parts with Kvikkjokk as the center point. A more recent book is Fredrik Neregård’s Kungsleden: a complete guide to the most spectacular northern parts of the classic King’s trail. There are also numerous articles written from hikes and ski trips along the trail. Anyone looking for a fictional novel may receive inspiration in the 1963 novel Kungsleden by Bosse Gustafsson, a romantic hiking thriller which was also turned into a movie in the mid 1960’s.

Tours on the King's Trail 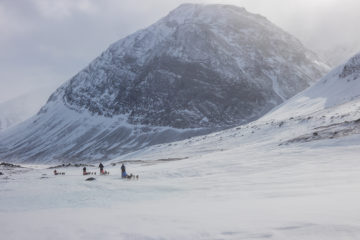 Expedition tour! We travel with our dog teams straight through Sarek National Park, one of Sweden's most mythical areas. Tougher
10 Days
Not available 2023 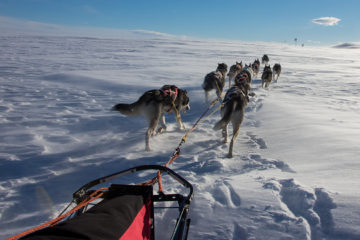 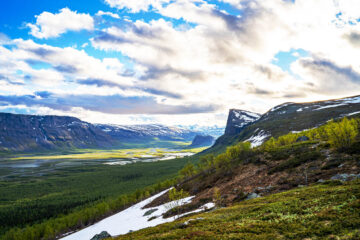 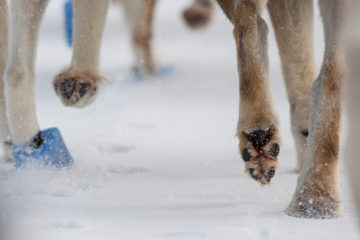 When most tourists have left the mountains, we start out on the final Husky Adventure for the season. In the
9 Days
April 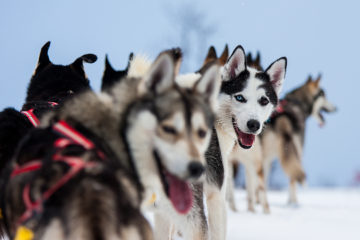 A taste of Sarek National Park

Do you like to go dog sledding in Sarek National Park but are not ready for the tougher expedition tour?
8 Days
Not available 2023 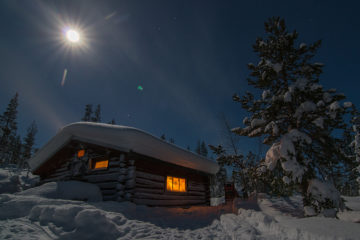 A dog sledding tour straight through the heart of Swedish Lapland! From the snow-covered forests in Jokkmokk up to the
8 Days
Feb + March 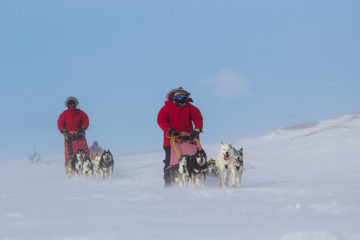 With huskies along the Northern King's Trail

A husky trip along the northern parts of the King's Trail with a detour towards the Norwegian border. A journey
8 Days
Not available 2023 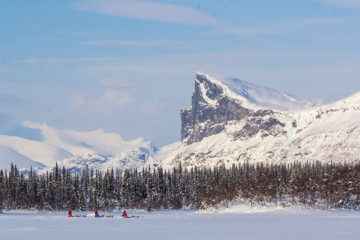 Join the adventure on a dog sled trip along the King's trail to the gate of Sarek National Park. A
8 Days
March + April 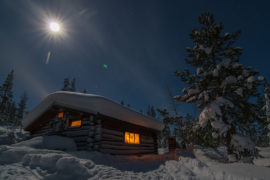 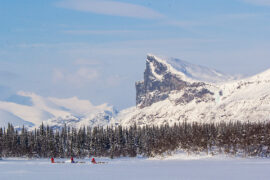